David Campbell, an IT technician, believes his job as a fixer would help him as city councillor

David Campbell, an IT technician, hopes to be elected in Ward 1 in the Oct. 22 municipal election. Dave Dawson/OrilliaMatters

In his role as an IT technician with the Township of Severn, David Campbell is a fixer.

“People come to me with their problems and I have to figure out what’s at the root of the issue, figure out a solution and do it professionally without losing my patience,” said Campbell. “I’m a fixer. I think, in a way, that is what a city councillor is.”

Campbell threw his hat into the ring at the last minute in 2014 and surprised many by finishing fourth in a crowded field of nine candidates in Ward 1. He missed getting elected by less than 300 votes.

Since that moment, he’s been focused on running again. This time around, he is one of just three candidates in Ward 1.

In the last four years, Campbell, 54, has become more involved in the community. He became a member of Orillia’s Active Transportation Committee and is currently chair. He also joined the Orillia Winter Carnival board in 2016 and helped revive the popular festival; he is now a vice-president helping to plan the 2019 event.

“I’m really proud of the things we accomplished – bicycle repair stations at the waterfront and Tudhope Park, a bike day, a pedestrian charter – on the active transportation committee,” he said.

He said resolving the Grape Island dispute is a key issue in Ward 1. He also believes more attention needs to be paid to roads and is also pushing more transparency.

“There’s this perception that council is up to something,” said Campbell, a lifelong Orillian. “There’s a perception council looks for reasons to go behind closed doors. I want to push to be absolutely 100 per cent open.”

To that end, he would like to see every vote of council recorded. That way, any resident could easily look up voting records. “We’re there to represent the people. The people deserve to know what’s going on.”

The long-time drummer for Dr. Krane said he has some concerns about a potential deal between Hydro One and Orillia Power. That deal was turned down by the Ontario Energy Board, but is being refiled this month.

“There probably should have been a referendum on it during this election,” he said, noting his main issue is that it appears some of the “promises” from Hydro One are not “in writing.”

Campbell, who formerly was a co-owner of Northern Business Equipment and worked at several local car dealerships as well, said he would be a hard-working councillor.

“I’ve worked really hard to make sure I’m ready for this,” said Campbell, who earned a spot on the honour roll after taking a course offered by the Association of Municipal Clerks and Treasurers of Ontario to learn the ins and outs of municipal government.

“I have owned a business, I understand how difficult it is to run a business (but) I’m also an average working person,” said Campbell. “I will represent the average working stiff. I’m not tied to any business and I don’t owe anyone anything.”

Campbell is married. His wife, Nancy, works at Orillia Soldiers’ Memorial Hospital as a pharmacy technician. Their daughter, Emily, is in her second year of biomedical engineering at the University of Guelph.

Emily helped inspire his passion for volunteering. He became involved with the Regent Park School Parent Council and was part of a fund-raising effort that resulted in a new playground.

“That showed me what can happen when people work together,” said Campbell, who noted his daughter also encouraged him to enter politics in 2014. “She told me to quit whining and get involved … so I did.”

The following is from the SUNonline by John Swartz:

DAVID CAMPBELL Biography: David Campbell was born and raised in Orillia. He has lived in Ward 1 for 20 years with his wife, Nancy, and daughter. He first worked in the automotive industry at Reg Smith Motors, Orillia Dodge and Thor Motors. He then became co-owner of Northern Business Equipment. He now works for the Township of Severn as an IT technician and has been getting an insider’s view of how municipalities work.

Campbell is the current chair of the Active Transportation committee and is on the board of the Orillia Winter Carnival. Campbell has participated in the Santa Clause Parade for 29 years building award winning floats and has participated in the Cardboard Boat Race every year of its existence. He has been the drummer in Dr. Krane for 18 years. He was also a member of the Regent Park School Parent Council.

Statement 1. I have lived in Orillia my entire life. While I have had many employment opportunities elsewhere, I chose to stay here and raise my daughter. I am proud to live here and want every citizen to feel the same way. While I think it is important to create jobs and bring new business and development to Orillia, I also think that we can’t lose sight of properly maintaining what we already have. I want to see the City progress, but it has to remain affordable. The most difficult issue the next Council will face is that balance between progress and affordability.

Statement 2. There has been a perception that Council ‘uses’ closed session meetings to ‘keep information from the public’. It is imperative that the new Council only enters closed session only when it is absolutely necessary. Decisions are being made and money is being spent on behalf of the Citizens of Orillia. It’s vital and only common sense that those same people should have all the information they need to understand any decision that Council makes on their behalf. So, when considering entering such a session, Mayor and Council should ask themselves ‘do we have to?’ not ‘can we?’

Is Orillia a pedestrian-friendly city? Committee wants your input

Charter meant as a guiding document 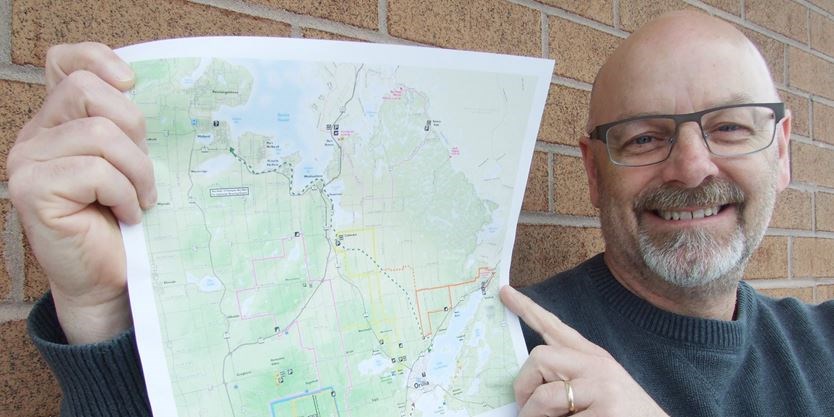 David Campbell, chair of Orillia’s active transportation committee, is inviting residents to weigh in on a draft ‘pedestrian charter’ that, if adopted, will help guide the city in future planning decisions. Campbell displays a map of Simcoe County-area trails. – Frank Matys/Metroland

In summer, David Campbell climbs aboard a mountain bike and pedals from his home in Orillia’s south end to Severn Township’s administration office.

The morning trek through the city ¬— the majority of it uphill — lasts about 50 minutes and leaves him invigorated.

“It is just amazing how good I feel,” said Campbell, who works in the township’s IT department. “And then over the winter I don’t ride, of course, and then I start to gain weight. It really affects a person.”

The benefits of active living are at the heart of an emerging effort that aims to position Orillia as a walkable community.

“The more active you are, obviously the healthier you are, the less likely you are to have health issues,” Campbell said.

Whether walking or riding a bike, it is also “good for the mind, it really is,” he added.

To that end, Orillia’s active transportation committee has developed a draft ‘pedestrian charter’ that it hopes will serve as a guiding document council and staff can use in future planning decisions.

“And it gives us a document we can refer to when we make recommendations to council,” said Campbell, the committee’s chair.

The proposed charter outlines the benefits of an urban environment that supports walking, while also encouraging development of the necessary infrastructure.

Residents are invited to chime in with input on the city’s current level of walkability after reviewing the document online. Submissions will be considered as part of the committee’s report to council in early spring.

Council will be asked to review and adopt the charter.

“We recognize that almost every personal outing involves a degree of walking or wheeling, and that walking is beneficial not only for improved physical health, but also has significant environmental, social and mental health benefits for a community overall,” Campbell added.

To read the draft charter, go to orillia.ca/pedestriancharter. 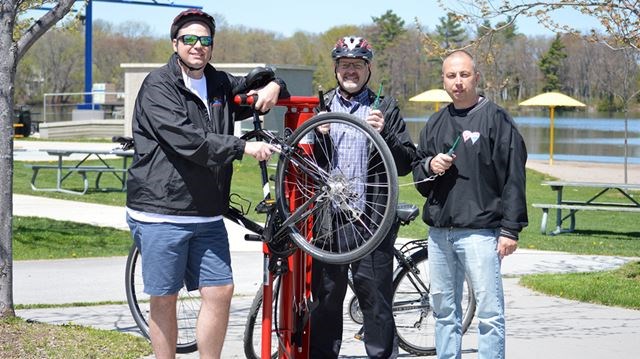 The bicycle repair stations allow cyclists to mount their bikes off the ground in order to carry out repairs with a variety of available tools.

“City trails continue to be a very popular route for residents or visitors travelling through and around Orillia both for work or pleasure,” said David Campbell, chair of the city’s active transportation committee. “These bicycle repair stations are a low-cost, but effective feature along the Lightfoot Trail that allow users to re-inflate a tire or do quick, basic repairs when unforeseen maintenance issues arise.”

Council approved the purchase and installation of these two stations using funding from Trails for Life donations.

‘We really feel that council is on board with us,’ committee chair says

ANDREW PHILIPS/SPECIAL TO THE PACKET & TIMES

David Campbell, who chairs the city’s active transportation committee and is pictured holding a Simcoe County bike map, said inroads have been made over the past while to make Orillia more bike-friendly.

Although there’s still some work to do, Orillia has come a long way over the past few years on the two-wheel front.

The committee presented a report to city council earlier this week, outlining recent milestones such as council’s decision in 2014 to add bike lanes and sidewalks as part of the Coldwater Road reconstruction while also encouraging the development of specific corridors covering routes across the city.

Besides stressing the obvious health and environmental benefits, the report noted the potential tourism benefits a strong cycling and walking culture can bring while also helping a major local demographic in the form of seniors and students — “two age groups which most greatly benefit from alternative forms of transportation.”

As well, Campbell said, he’s very happy with the province’s recent announcement it would help make it safer and easier for cyclists and pedestrians to get to Lakehead University, Rotary Place and the future Costco development in Orillia’s west end by providing $325,000 to help create a bicycle and pedestrian trail over Highway 11, connecting Highway 12 and Old Barrie Road.

“I think that’s fantastic, especially if you’ve ever tried to get over Old Barrie Road. It’s frightening.”

But Campbell said there are still other bridges and overpasses that can cause trepidation for both cyclists and walkers. As an example, Campbell regularly bikes from his home near the city’s new fire station by catching the Millennium Trail to his job at the Severn Township office near the Orillia Square mall. But while most of the ride provides both serenity and a good workout, the final leg over a West Street North bridge can create angst as he navigates the narrow portion adjacent to faster-moving cars and trucks.

Campbell said the city might be in a good position to apply for a Bicycle Friendly Community Award in 2017-18. The award was launched by the Share the Road Cycling Coalition in August 2010, and Campbell said the city didn’t even get a bronze declaration when it applied for the honour in 2013.

“We’ve already achieved some of the recommendations we received at that time,” he said.

The Share the Road Cycling Coalition — a provincial cycling-advocacy organization — was created to unite cyclists and work with municipalities to give them the tools to become more bicycle-friendly.

Article in the Orillia Packet & Times